When I got to this restaurant and was lucky enough to find an actual parking spot in their lot (an almost impossible of feat according to the food forums I prowled through to find this place). When I checked I was pleased to find I only had a 20 minute wait, which again is a total score for this place (apparently I should’ve played the lottery – the force was with me this day). There was free coffee and water just outside the restaurant to keep those milling about waiting for their tables placated. I realized when I walked in that I had been to one of their other locations in Scottsdale when I was there this past August. This made me very happy since my Mom and I had both had stellar meals at that location. As you may have guessed the place was pretty busy and waiters and waitresses were bustling around taking and filling orders and making sure everyone was happy.

The place is pretty loud, but I was eating alone so definitely not an issue but if I was trying to have a hushed conversation it would be a no go in that place. So if you need to have a quiet conversation do so in the car before or after your breakfast! I was seated at the counter and promptly asked if I wanted a beverage (their beverage list is extensive and includes mimosas, bloody Mary’s, and many other breakfast booze choices). The cafe mocha (no day drinking for me) I asked for came quickly and was one of the very best I’ve had (and I’ve had more than a few in my 49 years). I ordered the pancake flight (sort of the breakfast version of the wine flight, with a sugar high instead of an alcohol high) with their famous upside down pineapple cake pancake, sweet potato with caramel sauce and pecans pancake, and the special pancake of the day that was a buttermilk pancake with candied coconut and Girl Scout cookies drizzled with chocolate. 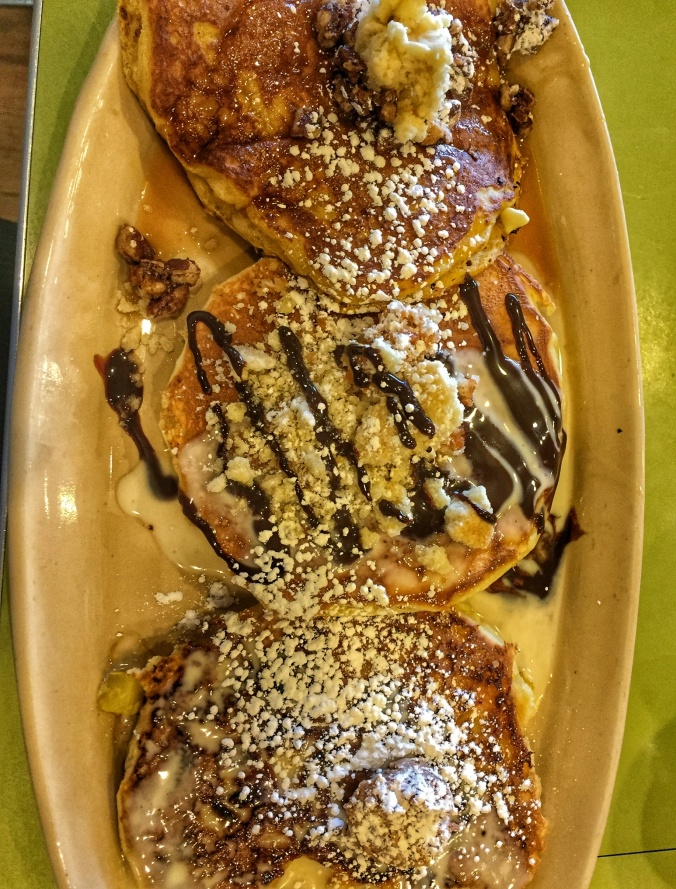 While it sounded kinda gross and like the sort of thing that might send a diabetic into a coma, I wanted to venture out of my safety zone (since I had 2 backup pancakes if it sucked) and turned out it definitely was NOT one bit gross. The pancakes came looking like sweetness on a plate and were pretty damn good with one caveat. The flavors were beautifully subtle but tasted like exactly what they were supposed to be. The drizzled sauces were sublime and the crumbled and/or buttery flavor filled toppings were excellent. My only issue with these gourmet hot cakes was that there was a sort of bitter flavor from what I’m guessing was baking powder that was added to the pancake mix. It was too bad because it really ruined my desire to give a full out effort to finish these (though my waistline was thankful). In fact I only ate about ⅓ of each pancake before I had to call it quits because of the bitter taste. I was hoping each would’ve been made from a different batter but I’m guessing it was all the same or that whomever made them used the same basic ingredients in each before adding the different flavors. It really is too bad about the baking powder or baking soda or whatever was added to the mix to give these pancakes a metallic bitter taste. They would’ve been heavenly if not for that. I’m giving them the benefit of the doubt and guessing they don’t usually taste like this… 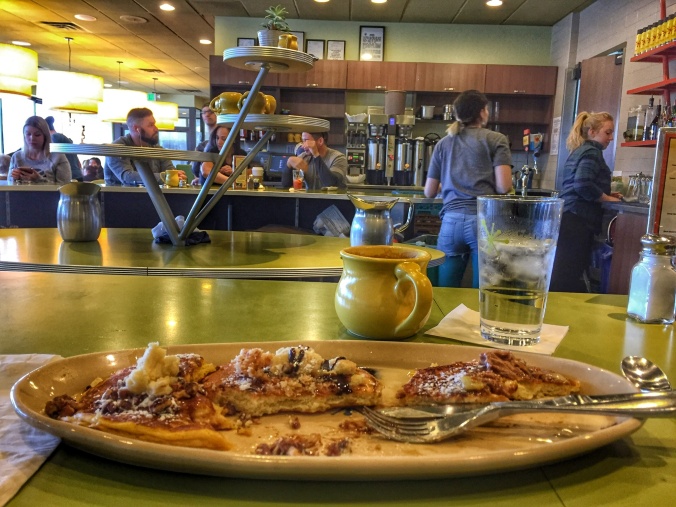 I didn’t have time to go back so that I could try some of the other menu items but I have a feeling I would’ve been pleased with anything else on the menu.  Apparently their chilaquile eggs Benedict is worth a try so that is on my to try list for my next go round the next time I find a Snooze restaurant during my travels. Despite the bitter pancakes and the inevitable wait I’d say this place is worth a shot, though you might want to skip the pancakes and try one of the many other items on the menu, unless metallic bitter is a flavor you enjoy. .