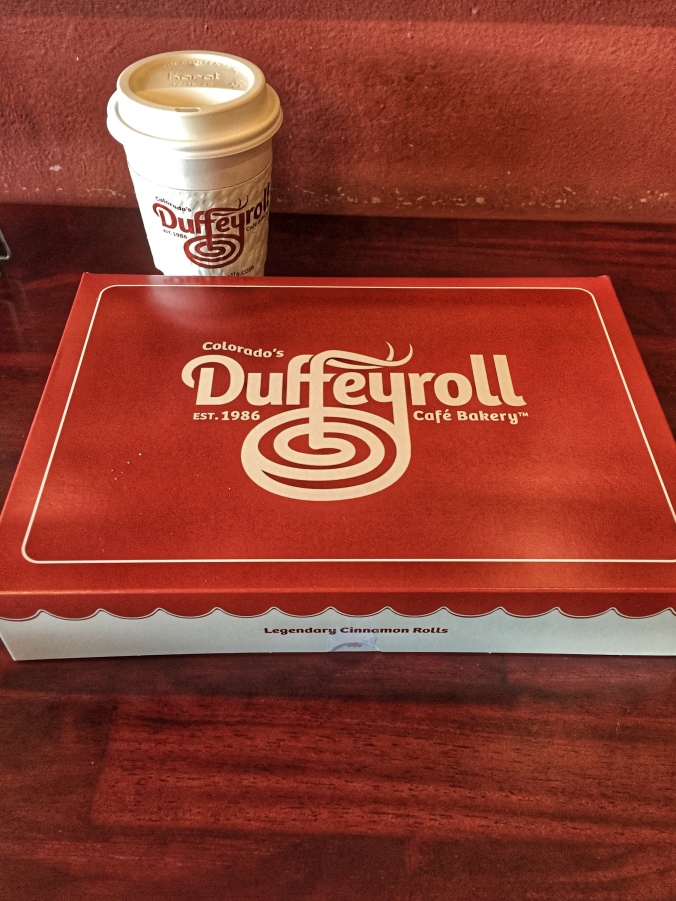 I know, I know, I shouldn’t have gone to this place since I am not a fan of cinnamon rolls and this place is renowned for these. BUT I’m not one to let “shouldn’t” stop me and in this case I was glad I didn’t. The mini cinnamon rolls I picked up to bring to the training I was attending ended up being much better than I could have possibly hoped for. They had a multitude of choices to include original, zesty orange, Irish cream, mountain maple, English toffee and pecanilla crunch. The rolls weren’t super sticky like a Cinnabon (thank god since I really don’t like Cinnabon) but were instead like a cross between a flakey croissant and a cinnamon roll In other words they made a believer out of a non-cinnamon roll kind of girl. They also had savory swirls with bacon and cheddar, house roasted tomato, hame and Swiss with honey mustard, and spinach, tomato and provolone. I didn’t try any of those but I imagine they are fantastic as well.

There were several breakfast sandwich options and I got the “Bakin Sun” which was bacon, cheddar cheese, avocado, scrambled eggs with chipotle mayo served on Duffey’s signature rosemary ciabatta roll (with the option of a pesto wrap instead). It was good but not fabulous but was large and I could only eat half.

The dulce de Duffy coffee was okay but not fabulous. I’m glad I checked this place out despite my misgivings and lack of love for cinnamon rolls. More than worth the trip, though recommend sticking to the various flavors of sweet and savory rolls instead of going for a scramble sandwich.